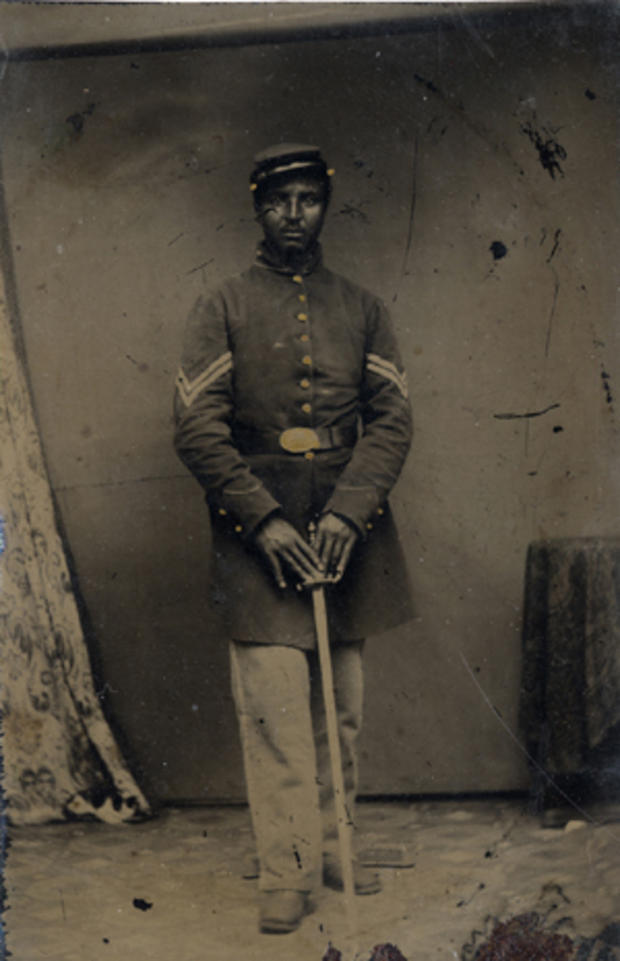 African Americans in the Civil War

In July 1862, President Abraham Lincoln and Congress authorized the use of African Americans as military combatants; however, they were not actually able to serve until after the Emancipation Proclamation took effect on January 1, 1963. Later the same year, Illinois Governor Richard Yates Sr. authorized the organization of the Illinois 29th Colored Infantry Regiment, better known as the 29th United States Colored Troops (USCT). Formed in Quincy, Illinois, on April 24, 1864, by Lieutenant Colonel John Boss, the 29th USCT was the only African American regiment raised in Illinois. The regiment was comprised of ten companies. Companies A through E were comprised primarily of men from Illinois, while companies F through K were mostly made up of men from outside the state. At least nine Black men from Champaign County enlisted into the 29th USCT at the Urbana Court House with four others enlisting in other “colored regiments” outside of Illinois.

From the Siege of Petersburg and the Battle of the Crate through Appomattox, the Illinois 29th USCT fought valiantly in the Eastern Theater of the war before being sent to Texas and most likely witnessing Union General Gordon Granger’s announcement of General Order No. 3, on June 19, 1965, proclaiming the state’s enslaved as free people. There, they served during the pacification of the state until they were ousted out. After the war and beyond, many of these returning soldiers and other African Americans who served during the Civil War and moved into the county were buried in the GAR portion of Mount Hope Cemetery in Urbana, Illinois, along with other county cemeteries.

After Lincoln and Congress authorized African American to fight in the Civil War, Illinois Governor Richard Yates Sr. gave the authorized to organize the Illinois 29th United States Colored Infantry Regiment. Known as the 29th United States Colored Troops (USCT), it was organized in Quincy, Illinois on April 24, 1864 by Lieutenant Colonel John A. Boss. The only African American regiment raised in Illinois. The regiment was comprised of ten companies. Companies A through E were comprised of primarily men from Illinois and were the first companies to be organized in April along with Company F which recruited men out of Wisconsin. Companies F – K were organized in October 1864, comprised of man outside of Illinois.

The regiment was present for the “trial by fire” on July 30, 1864, in the Battle of the Crater outside of Petersburg, VA. During the battle, the regiment suffered heavy casualties with 21 dead, including its original organizer, Lieutenant Colonel Bross. An additional fifty-six men were wounded and 47 went missing. Through early spring 1865, the regiment continued to see combat in the Petersburg Campaign. In the fall of 1864, they participated in the Battle of Weldon Railroad (known as the Battle of Globe Tavern) in August; the Battle of Peeple’s Farm (known as the Battle of Poplar Grove Church) in September; and the Battle of Boydton Plank Road in October. By early spring of 1865, they were holding the trenches at Chafin’s Farm and at Fort Barnham in the area. Then, on April 2, 1865, they participated in the assault that broke through the Confederates’ defenses. The Illinois 29th USCT marched into Petersburg singing “John Brown’s Body.” Following the campaign, the regiment was served on the Bermuda Hundred front north of Petersburg, and at Richmond. The Bermuda Hundred Campaign was named for the original plantation established in 1613 at the confluence of the James and Appomattox Rivers on which it was fought.

Their next action was in the Appomattox Campaign that ran from March 28–April 9, 1865. There, some regimental members witnessed the surrender of Robert E. Lee to Ulysses S. Grant at the Appomattox’s Court House. After the surrender came garrison duty in Virginia. Finally, in late May/early June, they and other African American troops were sent to Texas during the pacification of the state, the last stronghold of the Confederacy. They were witnesses to Union General Gordon Granger’s announcement of General Order No. 3, June 19, 1865, on Galveston Island, where the enslaved of Texas were for the first time told of their emancipation two years earlier. The date is now celebrated as Juneteenth. Being stationed at Corpus Christi, the Illinois 29th USCT patrolled along the Rio Grande River valley enforcing the new proclamation, subduing Confederate resistance and maintaining order until they were mustered out on November 6, 1865. They, along with other USCT troops, were procurers to the 9th and 10th Calvary and their two supporting infantry units known as the Buffalo Soldiers.

Several African Americans living in Champaign County, including farmers, tradesmen, and laborers, enlisted in the 29th Illinois USCT at the Champaign County Court House in Urbana. Other from the county traveled east to enlist in the 26th New York USCT and the Massachusetts 55th USCT, sister regiment to the famous 54th Massachusetts. The 54th USCT was noted as one of the first Colored Infantries organized after the Emancipation Proclamation at 1:01 a.m. on January 1, 1863. By the end of the Civil War, many African American veterans brought their families to Illinois and eventually settled in Champaign County.

Enlistees in the Illinois 29th include:

Enlistees in Infantries outside of Illinois: