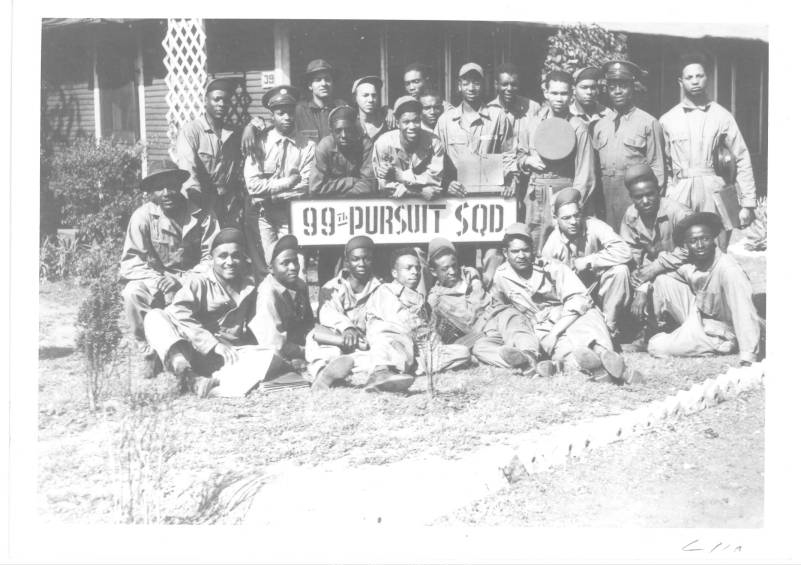 Former Chanute Air Force Base and the 99th Pursuit Squadron

Image Credit:
Enlisted men and aviation cadets of the 99th Pursuit Squadron posed in front of Building T-39 (mess hall) at Chanute Field, Rantoul, Illinois. Some of the men are holding folders and notebooks from their classes. (Courtesy of the National Museum of the United States Air Force.)

On March 22, 1941, the first all-Black fighter squadron, known as the 99th Pursuit Squadron, was activated at Chanute Field. “Pursuit” was the pre-World War II term for “fighter.” At the time, the U.S. armed forces maintained segregated units. Over 250 enlisted men were trained at Chanute Field in aircraft ground support—airplane mechanics, supply clerks, weather forecasters and armorers. When the men of the 99th left Chanute to go to Tuskegee in November, they left behind the highest collective Grade Point Average ever earned at the base, before or since their stay. These men would become the core of the Black squadrons forming at Tuskegee and Maxwell Fields in Alabama where Black flyers were being trained—later known as the Tuskegee Airmen. 📍

On January 16, 1941, the War Department grudgingly announced the formation of the first all-Black, self-sufficient pursuit squadron in the United States Army Air Corps. Informed by false stereotypes and bias, many people were certain Black men were incapable of handling the complexities of flying military airplanes. They also thought the technical skills to maintain and repair these machines and support pilots were out of reach. For many others, though, an all-black squadron was an opportunity to definitively disprove these erroneous assumptions and create an equal opportunity for African Americans to serve their country. Men from across the country, including Champaign and Urbana, volunteered to serve.

Normally a new squadron is formed around a core of experienced personnel drawn from existing squadrons. Since there were no Black squadrons to draw from, every member, from officers to enlisted men, required training. Tuskegee Army Air field was designated as the new squadron’s primary training base, but it was still under construction. To expedite training, another base was needed. Chanute Field in Rantoul, Illinois, was evolving into the best technical training center in the US Army Air Corps. The Air Corps and War Department chose it to begin the men’s training. The darker side of this decision was other capable bases objected to training Black airmen.

On March 19th, 1941, the all Black 99th Pursuit Squadron and supporting Air Base Detachment were constituted on paper. On March 22, the squadron activated at Chanute Field, and the Air Base Detachment soon followed on May 1st. Technical training began at Chanute almost immediately under the command of temporary white officers. No pilots trained at Chanute. They went directly to Tuskegee for training later in July.

Six aviation cadets and over 270 enlisted men initially trained at Chanute Field.  The cadets would become the first Black commissioned officers for the squadron and air base detachment. In addition to basic officer training, two cadets trained as armaments officers, two communications officers, and two as engineering officers. These men also lead the enlisted men in drill and on work details. The enlisted men trained as mechanics, welders, metalworkers, parachute riggers, teletype operators, weather observers, Link trainer instructors, radio technicians, armorers, instrument technicians, and clerks. They were the first Black men trained by the US Army Air Corps in these fields.

Other Black men not assigned to the 99th Pursuit Squadron or Air Base Detachment came to Chanute Field, too. It was deemed unacceptable for a white airmen to serve or be seen as subservient to black trainees. Therefore, the base quartermaster received additional Black personnel to assume service duties, like housekeeping, cooking, and laundry, specifically for the Black trainees. These service personnel were vital, but often overlooked and unsung.

Chanute Field was one of the first partially integrated military bases in the United States. Training Black and white personnel separately in the exact same specialties quickly became untenable. At least in some situations, Chanute integrated training. White commanders at Tuskegee would later criticize Chanute’s small step toward equality. Outside of training, Chanute remained fully segregated. The men of the 99th and air base detachment did not enjoy the same level of housing, services, or recreational opportunities as their white counterparts.

Despite a multitude of challenges, the Black trainees excelled at Chanute. Academically, they were unrivaled, and won virtually every athletic event they entered. Men from Chanute began transitioning to Tuskegee Army Air Field in October, 1941, and by November, the squadron and the air base detachment were officially relocated. The technical training phase, deemed almost impossible by some detractors, took less than one year to complete. Chanute Field’s Commanding officer, Lieutenant Colonel Raymond O’Neil stated, “These men are good soldiers… this is the Army, and it is a serious business with them!”

In 1942, the Army Air Corp redesignated pursuit squadrons, including the 99th, more accurately as fighter squadrons. The now 99th Fighter Squadron and Air Base Detachment left Tuskegee to fly combat in North Africa early in 1943. Flying P-40 Warhawk fighters, the 99th’s role was primarily close air support. Their success, despite many racially driven obstacles, facilitated the activation of the all-Black 100th, 301st, and 302nd Fighter Squadrons to form the all-Black 332nd Fighter Group. In 1944, the 99th Fighter Squadron joined the 332nd Fighter Group at Ramitelli Air Field in Italy. The airbase detachment merged with the all-Black 366th Service Squadron. Red-tailed P-51 Mustangs replaced the P-40 Warhawks, and the mission shifted to bomber escort. The 33nd Fighter group became one of the finest bomber escort units of World War II.

Chanute Field’s connection to the Tuskegee Airmen continued after the war. Brigadier General Charles McGee left his engineering studies at the University of Illinois in 1942, and flew fighters with the 301st Fighter Squadron. He came to Chanute in 1948 and completed Aircraft Maintenance Officer Training. Colonel George “Spanky” Roberts was one of the first pilots and Black commanding officers of the 99th Pursuit Squadron. He was also the first black commander of a major organization at Chanute Air Force Base. Roberts commanded Chanute’s 3345th Maintenance and Supply Group from 1954 to 1960. In 1987, Roberts Hall, a new 1000-person dormitory, was dedicated in his honor.