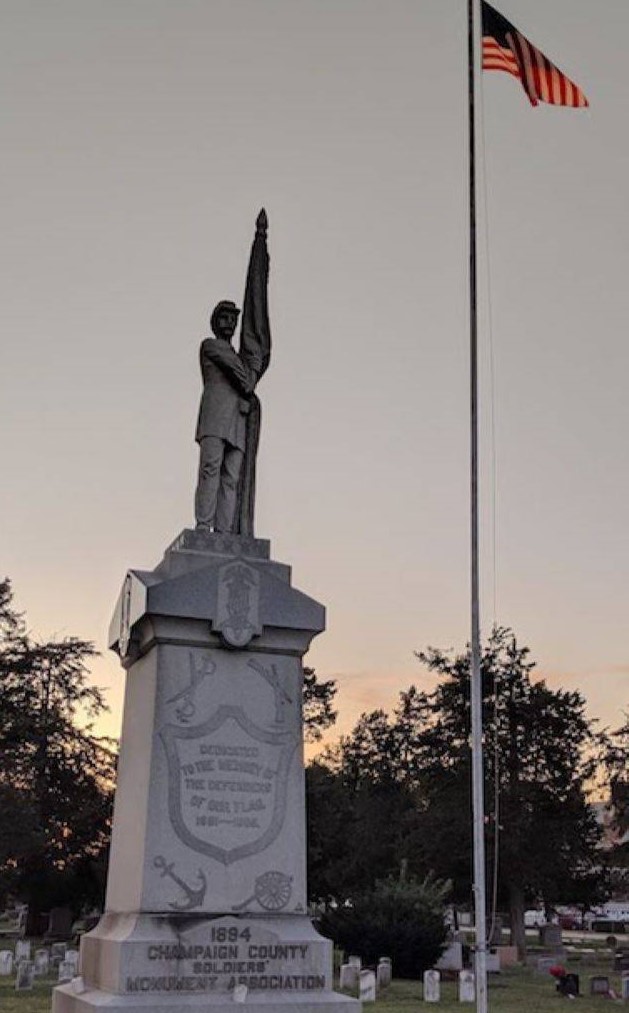 Many local African Americans who fought in the Civil War are buried in Mount Hope Cemetery in Champaign-Urbana as well as in other cemeteries around the county. Although many individual markers do not exist or have not been relocated, our understanding of which Civil War veterans buried at Mount Hope and other cemeteries are based on available records. The list of veterans below, though extensively researched, may not be complete.

Enlistees in the Illinois 29th include:

Enlistees in Infantries outside of Illinois:

African Americans from Champaign County fought bravely, and died, in World War I. Those who served did so with courage, honor, and distinction. Many of those who returned home found community and services at the William F. Earnest American Legion Post 559. Originally located at Fifth and Hill Streets, the Post is now located at 704 N. Hickory in Champaign. It was chartered in 1932 by African American World War I veterans and named for a fallen comrade who was a University of Illinois student-athlete from Homer, Illinois. Earnest served as a sergeant in the all-Black 370th Infantry Regiment from Illinois. One of the columns at Memorial Stadium also bears his name. The founding members of Post 559 were Clifford Caldwell, Robert H. Earnest (brother of William F. Earnest), Dr. L.P. Diffay, Dr. Henry Ellis, Alvin Foxwell, Raymond Hines, Thomas Macklin, Cecil D. Nelson, and George Ray. 📍

The Douglass Center Library was organized in 1970 to serve both Urbana and Champaign, a joint project of the two cities’ libraries, Lincoln Trail Libraries System, and the Champaign Park District. The Library was named for Frederick Douglass, the American abolitionist and journalist who escaped from slavery and became an influential lecturer — including at least one stop in Champaign. 📍

Walter Thomas Bailey was the first African American to graduate with a degree in architectural engineering from the University of Illinois in 1904, and he was the first licensed African American architect in Illinois. He contributed to the Colonel Wolfe School in Champaign as a young man, and later enjoyed a successful and influential career leading architectural projects throughout the United States. Bailey assisted with the design of the Colonel Wolfe School at 401 E. Healy in Champaign. The Colonel Wolfe School was constructed in 1905 as a public elementary school. Named after Colonel John S. Wolfe, captain of the 20th Regiment of Illinois Volunteer Infantry during the Civil War, the building was designed by the architectural firm Spencer & Temple from Champaign. 📍