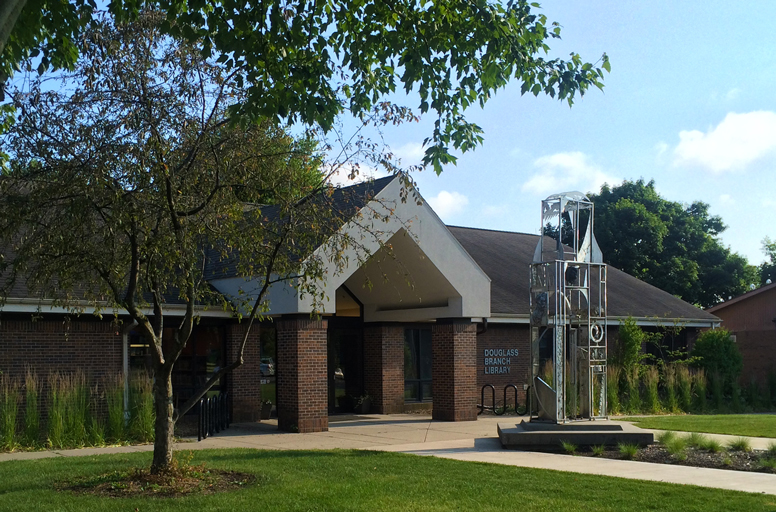 The Douglass Center Library was organized in 1970 to serve both Urbana and Champaign, a joint project of the two cities’ libraries, Lincoln Trail Libraries System, and the Champaign Park District. The Library was named for Frederick Douglass, the American abolitionist and journalist who escaped from slavery and became an influential lecturer — including at least one stop in Champaign. 📍

For five years, the Douglass Center Library occupied a room in the Douglass Community Center at 801 N. Sixth St. In 1972, the library began to operate as a branch of the Champaign Public Library. In 1975, Urbana discontinued its involvement in the project for financial reasons. The following year, the Branch was moved to a small building at 310 E. Bradley Avenue.

The existing 6,074-square-foot Douglass Branch Library opened in June 1997 with space for 10,000 items. The building was designed by Olsen + Associates and constructed at the south end of Douglass Park at 504 E. Grove Street. The facility was jointly funded by the Library, the City of Champaign, the Illinois State Library, the Champaign Park District, and the Champaign Public Library Foundation.

Frederick Douglass: In Remembrance, a work of art by Preston Jackson that stands near the entrance to the Douglass Branch, was commissioned by the Champaign Public Library Foundation and dedicated August 14, 1999. It was funded by gifts from the Friends of the Champaign Public Library, area business, and donors from the community, and in part by a Live and Learn Construction Grant from the Illinois State Library, a division of the Office of the Secretary of State.

Harriet J. Lawhead School, built in 1907, was a small, four-room building. During its early years, it served German and Italian immigrants in the neighborhood. As African Americans moved into the area, the school was integrated for a period of time, but by the 1940s it was attended only by Black students. White children who lived in the area were sent to Columbia School. During World War II, two rooms in the basement of the school were used as a Servicemen’s Club, organized by community members for African American soldiers who were not welcomed in the USO at Chanute Field. The school was closed in 1952, prior to the opening of the new Booker T. Washington School and razed in 1990. It is now a parking lot.

Located at 401 E. Park Street in Champaign, Bethel A.M.E. Church is the oldest African American led church in Champaign County. It was organized in 1863 and predates the establishment of the University of Illinois. During the early part of the century when segregation was a fact of life, Bethel established a library and had a church orchestra. The church served as a meeting place for Black students attending the University of Illinois, establishing monthly lyceum meetings where students and members of the congregation came together for lectures, discussions, debates, and musical performances. In 1915 it was the site of the founding of the Twin Cities Chapter of the National Association for the Advancement of Colored People (NAACP). Spiritual, community and educational development have continued to be a mission for the church. 📍