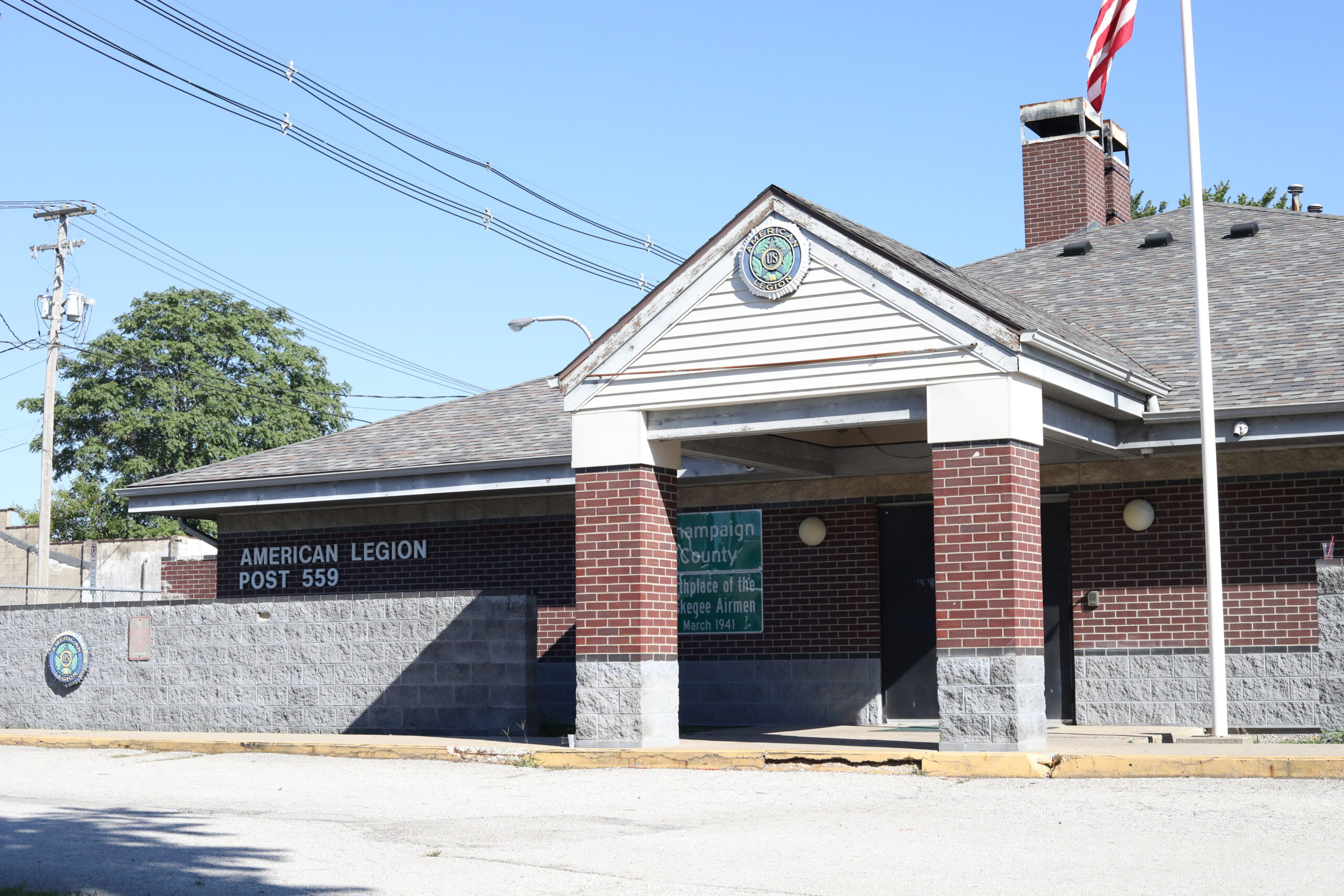 African Americans from Champaign County fought bravely, and died, in World War I. Those who served did so with courage, honor, and distinction. Many of those who returned home found community and services at the William F. Earnest American Legion Post 559. Originally located at Fifth and Hill Streets, the Post is now located at 704 N. Hickory in Champaign. It was chartered in 1932 by African American World War I veterans and named for a fallen comrade who was a University of Illinois student-athlete from Homer, Illinois. Earnest served as a sergeant in the all-Black 370th Infantry Regiment from Illinois. One of the columns at Memorial Stadium also bears his name. The founding members of Post 559 were Clifford Caldwell, Robert H. Earnest (brother of William F. Earnest), Dr. L.P. Diffay, Dr. Henry Ellis, Alvin Foxwell, Raymond Hines, Thomas Macklin, Cecil D. Nelson, and George Ray. 📍

Established from the all-Black Illinois 8th Regiment of the National Guard, the 370th Infantry was the only Infantry that entered the war with an all-Black staff, officers, medical unit and soldiers. They were trained for combat by and attached to the French Army because the U.S. Army was concerned about allowing their white troops to fight beside them. Called the “Black Devils” by the Germans because of their relentlessness and silence as they went over to trenches to attack, they were the first group to cross over to Belgium before the end of the war pursuing the enemy. They were one of the most decorated Infantries, with 71 soldiers and officers receiving the French Croix de Guerre, which is the French equivalent of the US Medal of Honor.

William F. Earnest was the first African American to die in World War I on September 17, 1918. The son of Oliver Frank and the nephew of Jacob Earnest of Homer, William (called Frank), graduated from Homer High School in 1915. His brother Robert graduated before him from the same school. He entered the University of Illinois in 1916 as a student athlete to study agriculture, and he was a member of the Kappa Alpha Psi Fraternity. His family moved from Homer to Champaign so he would be able to stay at home while studying at the University, since African Americans were not allowed in student authorized housing. He became a member of Bethel AME Church before enlisting in the military on June 1817 in the Danville Company of the 8th Illinois, which became part of the all Black 370th. He was buried in the Oise-Aisne American Cemetery in France.

A memorial service was held on Sunday, February 2, 1919, in Homer. The service description read:

“At this time several people from Champaign including the parents, Mr. and Mrs. Frank Earnest were present. The service opened with several patriotic songs. Miss Inez Dennis sang a solo entitled, ‘When the Blue Service Star turns to Gold’ and Mrs. C.E. Cutler and Mrs. Percy O’Neil sand a duet. Mrs. Earnest pinned the gold star on which takes the place of the blue. It had been planned to have a Champaign quartet and also a pastor from the African Methodist church present but both parties were unable to come. The quartet expects to come later. The service was very impressive and handkerchiefs were used quite frequently. This gold star, representing the life of Frank Earnest, a model young man, is the second star on the service flag.”

Albert R. Lee was born on June 26, 1874, on a farm outside of Champaign, Illinois. He attended the University of Illinois in 1894, and in 1895 he became the second African American hired at the university. He started as a messenger, but then became the clerk for the Office of the President. Lee served under six university Presidents. At a time when African Americans were not allowed to live on campus, he took it upon himself to assist them with housing and maneuvering through school, becoming known as the Dean of African American students. 📍

Harriet J. Lawhead School, built in 1907, was a small, four-room building. During its early years, it served German and Italian immigrants in the neighborhood. As African Americans moved into the area, the school was integrated for a period of time, but by the 1940s it was attended only by Black students. White children who lived in the area were sent to Columbia School. During World War II, two rooms in the basement of the school were used as a Servicemen’s Club, organized by community members for African American soldiers who were not welcomed in the USO at Chanute Field. The school was closed in 1952, prior to the opening of the new Booker T. Washington School and razed in 1990. It is now a parking lot.

The Dr. Martin Luther King Subdivision, located between North Fourth Street and the Canadian National railroad tracks in Champaign, Illinois, was a part of urban renewal that took place in the late 1960s, eventually replacing the old Oak-Ash neighborhood. It began in the 1980s and was the only urban renewal project that was not replaced with public or subsidized housing. The names of the streets in the subdivision were chosen to recognize African Americans who were historically significant for the community and submitted to the city council by J. W. Pirtle. 📍

The Trail relies on the generosity of private and public donations. With your gift, you help ensure that the Trail is a free, accessible experience for all. You also help make our vision—to inspire conversation, expand understanding, and contribute to a better society—a reality.
Donate Now
© 2022 African American Heritage Trail | website by Surface 51
We use cookies on our website to give you the most relevant experience by remembering your preferences and repeat visits. By clicking “Accept”, you consent to the use of ALL the cookies.
Do not sell my personal information.
Cookie SettingsAccept
Manage consent